By now many people have seen the hit show Jay Leno’s Garage. Where the iconic late night television host walks viewers through his impressive collection of vehicles. Seen by families every week it is one of NBC’s hottest shows. On August 7th, NBC aired an episode showing the heart behind the scenes of their show.

Jay invited Army veteran Craig Andrade and his family to come to California to view his garage.
Mr Andrade lost both of his legs and a friend on tour in Iraq when his patrol was struck by an improvised explosive device. When he returned home, he was tasked with the difficult process of rehabilitation, which he was able to accomplish through the help of his wife.

Hearing this story prompted Jay Leno, Chrysler, and The Wounded Warrior Project to find Mr Andrade a means to transport his family and himself. Working together they surprised the family with a brand new 2017 wheelchair accessible Chrysler Pacifica with a BraunAbility side entry conversion. Offering enough space for the entire family to finally ride together. The gift was enough to move the veteran and his wife to tears.

Handing Mr Andrade’s children the keys Leno reaffirmed his thankfulness for Mr Andrade’s sacrifice saying “"You know your dad is a real American hero, This is for him. … We can't thank you enough.”

The moments captured on camera are truly moving, see the full episode here.
Thank you to Jay Leno, Chrysler, and the Wounded Warrior Project for making such a massive difference to Army Veteran Craig Andrade and his family.

For more information on BraunAbility and the side or rear entry Chrysler Pacifica, check out our Wheelchair Vans page, offering technical details and specs for each conversion. 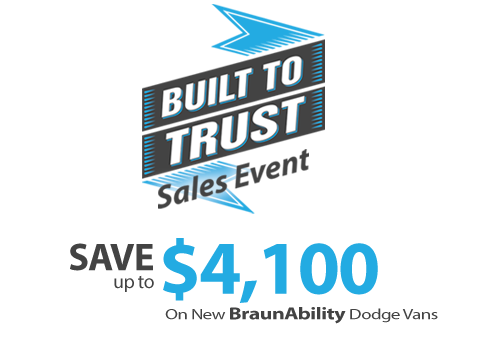